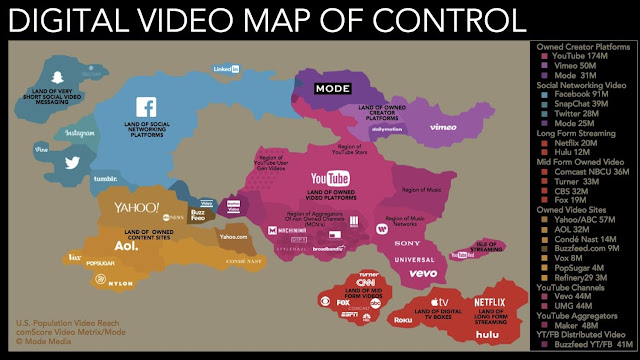 Here is an interesting look at the current digital video ecosystem by Mode Media. It's grouped different platforms together into continents and spread them across a map like infographic.

There is nothing we don't already know in here but it's a great way to sort different platforms and services and how they can be categorized in a visual way.

Original article on Techcrunch.
Posted by Unknown at 2:22 PM 1 comment:

Although YouTube is still GTChannel's biggest market, we feel that our creators and content need to develop new distribution channels. Our audience is consuming content in every way possible and we want to be there.

We have continued to expand our reach onto other platforms and in October we launched on Comcast's new video service called Watchable.  Watchable curates the best content from popular video networks and we are proud to be one of the select content providers for this new service.

The 2015 SEMA Show took place from Nov 3 to 6 and GTChannel was on site to cover the best of the best of the show. It was personally one of my best show experiences because we were able to focus on a few goals we set out to achieve.
Top 13 Tuner Cars of SEMA 2015

1. Create Good Video: We really just focused on making two videos from the show.  The first piece was going to be a "Top Tuner Car" video because that is what our (at least my) expertise lies in. I'm not going to pretend I know everything about trucks and muscle cars because I don't.  We're producing videos for GTChannel's home channel so let's just stick to what our audience wants to see and what we do best.  We also didn't want to go in blind to the show and end up with a highlight video. The show is enormous and just absolutely impossible to cover everything. (Not according to our friends at Speed Academy...) So we chose to focus on selecting a number of "tuner cars" and list them as our favorites. That direction ended up saving our time and prevented us from scattering our resources all over the place.
Our second video is on the GT Awards with an interview with Sung Kang (Han from Fast & Furious Tokyo Drift) and Kenji Sumino from GReddy.  You may have seen his Z Dream series on the Speed -Fox YouTube Channel which was beautifully shot by eGarage.  We had interviewed Sung and Kenji at the Fugu Z reveal event in Irvine the week prior to the show so we didn't have to interview them during the crazy SEMA week. It just happened that we were also working with Sony to produce a GT Awards video so it turned out perfect that they also won Best of Show for GT Awards. It's extremely rare that things fall into place this perfectly but when it does, it feels really good!  That video with the Fugu Z featuring Sung and Kenji is scheduled for release in the next couple of days. 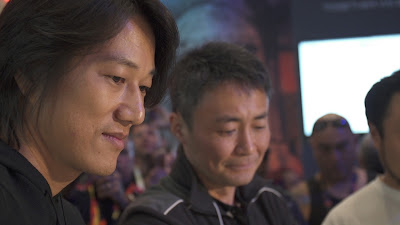 In partnership with the ID Agency, I directed videos for CTEK Battery Chargers. We have created a series of videos leading up to the show featuring builders and the CTEK Battery Charger. It's a brand/product integrated video series that could be a good template for future video projects. We hope to get more partner channels involved in these types of brand/product integration projects. It's a great way to earn additional revenue from the videos we create.
How LTMW Became The Go-To Builder - Road 2 SEMA Presented by CTEK

2. Partners: The SEMA Show is a once a year event where many of our Network Partner Channels get together in one location. Since we sponsor the Honda Soiree, we took advantage of the situation to get a little corner to hang out and enjoy a few drinks together.  Individually we were also able to see a bunch of partners on the show floor, at restaurants or on the dance floor. It's always great to see our partners in person. Maybe next year we'll even plan a bigger get together at SEMA with more of our awesome partners.

The Speed Academy guys unfortunately were not able to come out to any of the parties but heck they got a lot of work done.  This video was released on the first night of the show and it already has 123K views.  Way to go guys!

MotoIQ was also there to cover the SEMA Show. These guys cover the industry from the car nerd perspective and we love their stuff.

Photo M.D. Media looks like he got some great footage. Let's see the video now!

SuperspeedersRob walks the floor and shows us what's hot or not.

3. Taking Care of Biz: The SEMA Show is also a time for us to wheel and deal. But the reality is that not much ever really gets done at the SEMA Show floor because people are just so busy and hard to get their attention. You have to do the ground work before SEMA so you can follow up at SEMA or actually close the deal as a formality.  We took the opportunity to meet face to face with several potential brand clients which we hope to work with in 2016.
This is also a great time to just hang out with folks you normally only work with. The after hours of SEMA is just as important to what is going on during show hours. The big difference with other trade shows is that we are all there to share a common passion which is cars. So when we get to relax over a drink or a meal, we're still talking about CARS!

Out of my 10+ years of going to SEMA, the key is not to try to do too much.  If you try to grab too much candy, you're hand is going to get stuck and you won't be able to pull it out of the jar. So focus your efforts on a few important things. Set those goals and spend your time wisely.  And drink a LOT of water!

See our Instagram for car pics from the SEMA Show.

Posted by Unknown at 5:08 PM No comments: